Our amazing "Media Man" Micheal Oswald has been published in the Huffington Post.  Please take a moment to read his article on how Special Olympics Builds Communities of Inclusion.
http://www.huffingtonpost.com/micheal-oswald/special-olympics-builds-c_b_8711612.html?fb_action_ids=543416819168682&fb_action_types=og.likes
Congratulations, Micheal!

By Mike Oswald SOBC – Sunshine Coast athlete reporter
The 2018 April Fools’ Run had special meaning for Special Olympics BC on the Sunshine Coast. On Sunday, April 8, four SOBC track and field athletes, Amber Maher, Genny Verge, Bruce Stuart, and Micheal Oswald, put all their hard work together after weeks of training with coach Tania Finnigan in anticipation of the race. Each SOBC athlete ran one leg of the total 21.1-kilometre relay.

The race began on Park Road in Gibsons and finished at Mission Point Park in Davis Bay. It’s thanks to athlete Stuart that coach Finnigan thought to include the other three. Stuart, like Finnigan, is an avid runner who has competed for many years. Stuart wanted to run in this year’s April Fools' Run so Finnigan figured it would be a great chance for the other track and fielders to gain some experience in long distance running. Training began in March with the coach and four athletes meeting weekly to run 5 km as a team. It gave all of them the chance to bond as a unit, who dubbed themselves the Coast Cannons, and to see first-hand the effects of distance running.

This activity blends perfectly with SOBC Sports Consultant Jacques Thibault’s view that athletes who train on their own time in their preferred sports gain better knowledge, understanding, and ultimately inability. Maher is a spitfire on the track. A sprinter by nature, she has gone to BC Games as well as the 2017 Provincial Games in Kamloops. She has done very well and continues to exceed all expectations. Verge is also a BC Games and Provincial Games attendee who has the fortune to be on her way to the 2018 National Games in Antigonish, Nova Scotia this summer. She is a swimmer who has launched into running and track as a form of cross-training. Oswald is a swimmer and runner who has seen provincial competition twice, once in 2013 and again in 2018. He, like Maher, is a sprinter but through his experiences running with Stuart, is slowly learning the art of endurance running. Finnigan has been coaching track and field for many years and also instructs Club Fit with many SOSC athletes each Monday morning from 10 to 11 a.m. at the Gibson’s Rec Centre.

​The success of this first venture has the Coast Cannons considering that their next challenge might be to run the 10 km Four Lakes Run later this summer. Go Special O!
SIGN UP A BUSY AFFAIR - MICHEAL OSWALD - THE LOCAL - SEPTEMBER 30, 2015
Sechelt on Sept. 17 at the Sunshine Coast Association for Community Living office. The whole room was abuzz with activity: athletes and caregivers moving this way and that. Some were paying fees (Special Olympics is a non-profit organization though certain fees apply), others gabbed to each other about their summer vacations. Seeing everyone together again really had me looking forward to the new Special O season.

I talked with several athletes about what sports they chose. Many were repeating last season’s and some were trying new ones. Weather permitting snowshoeing might happen and we also discussed whether Dragon Boating could be a sport for coastal athletes.

I interviewed a new athlete who recently moved here from Saskatchewan. Olivia Wensel told me that she had signed up for Track & Field and Basketball. She had previously done S.O. in her home province and is looking forward to trying the same sports here.

It will be great to have a new addition to the Gibsons Basketball Team, Olivia! And next spring I know you’ll set the track on fire!

In all, 58 athletes showed up. Fifty-five were returning and three are new.

Olivia Wensel has joined the Special Olympics on the Sunshine Coast after moving here from Saskatchewan.
The first sport to kick off the season will be swimming which starts on Oct. 3. We welcome our 2011 World Games athlete Stephanie Rogers back to swimming. She is also taking part in Rhythmic Gymnastics!
National Coaches week was Sept. 19-27. It was a time to thank all the coaches throughout the world who dedicate their precious time. It is especially important to our local chapter where the time and effort that the coaches volunteer is huge. It means our athletes can take part in something we consider a vital part of our lives.

Community support is evident in other ways as well. On Sept. 26 Ken McBride hosted a fundraiser for Special Olympics Sunshine Coast, at the Sechelt Arts Centre. Ken, a well-known local musician, also hosts a music program for people with disabilities at the Gibsons Community Centre every Wednesday. Ken played some songs from his very progressive new album “Tone” including “Altamira”, “Tone” and a song originally recorded by Jimi Hendrix, “The Wind Cries Mary”

I would like to thank all those who attended and thank Ken for dedicating a wonderful evening to the totally awesome cause of Special Olympics.
SOCCER & GOLF SEASON UPON US - MICHEAL OSWALD - The Local - June 3, 2015
There are some big games coming up. Our Sechelt team is playing the RCMP on June 22nd. Coach Mike Gojevic says, “We are looking for an exciting game like we did with Floor Hockey in the winter.” Gibsons will attend a tourney in Delta on June 13th and the final annual game between Gibsons and Sechelt will be on June 15th followed by the Annual General Meeting/

Golf is another VERY popular sport; in fact it has a waiting list. Coach Chuck Bertrand and his volunteers teach experienced golfers and novices the fine art of the putt and the green. It takes place at the Sechelt Golf and Country Club (now Blue Ocean Golf Club) and is Wednesday evenings from April to June.

This report came in from coach Chuck Bertrand about golf:

“This season we have 12 golfers coming out – some are experienced and some are new beginners. Many of the athletes have been working on the “Squish the Bug” technique and it has been very successful as all of them are hitting further and straighter.

Maci is new to golf this year, has been working very hard on her basic fundamentals.  She is now easily striking the ball 75-100 yards.

With the lovely weather we have had this spring, we have been fortunate to get out on the golf course almost every week.  We generally warm up at the driving range and then head out to golf a few holes. Big thanks to the Sechelt Golf & Country Club for supporting our program.”

On June 20th our annual Volunteer Appreciation Banquet is an occasion for athletes, coaches and family members to dress to the nines and gather for socialization, food and a little dancing. We will also announce the winner of the latest raffle. I can hardly wait. If you would like to buy a ticket please call 604-885-2987. The prizes range from a signed Canucks hockey stick to passes for the Coast Gravity Park.

Local Coordinator Pat Stuart sent me some information on this year’s banquet.

“The Volunteer Appreciation Banquet will be held June 20 at the Sechelt Legion from 6-9pm.  This is an opportunity to recognize and thank all our wonderful volunteers.  Special recognition pins will be presented to 6 coaches who have volunteered for 5 years and 10 years.  Jeannie Barwise is 10 years, Chuck Bertrand 5, Marie Telder 5, Robert Wotton, 5 Tania Flynn 5, Randy Younghusband 5.”

That about sums it up SCSO fans. Next month is the World Games in Los Angeles! I know we are all excited.

Till next time, keep on playing. 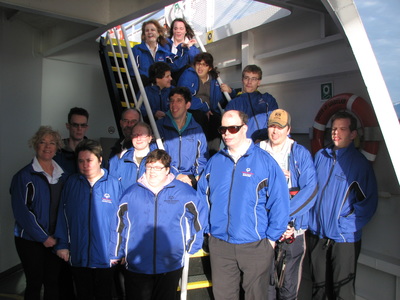 Last article I mentioned a basketball tournament in Coquitlam and a swim meet at UBC.

The team played 4 games as well as some players subbing for another team that was short 3 players.

In all four games, Gibsons came out the definitive champs, winning every game with strong dribbling, passing, shooting and amazing ball control.

On Sunday, February 22nd, the Sunshine Coast Dolphins, our local SOSC swim team travelled to UBC for a casual swim meet and competed against athletes from all across the Lower Mainland.

Genny Verge and Michael Beckman wowed spectators with their 25-metre butterfly. They are the only two members of the Dolphins who are trained for this difficult stroke. Kyra Gray Richmond, a new swimmer to the Dolphins placed first in 25-metre freestyle and backstroke. Our most improved swimmer was Stephen Malcom who knocked off almost 32 seconds off his entry times.

Micheal Oswald is the "media man" / athlete reporter for Special Olympics Sunshine Coast.  You can frequently find him out at the many events our local hosts, whether it be taking photos or interviewing participants and/or coaches.